Truck and trailer units will be able to use the Takaka Hill Rd from Tuesday for the first time since a storm badly damaged it on February 20, under certain conditions.

“It eases the situation a lot more,” Sollys freight owner Merv Solly said on Monday. “The restrictions and timing will still be a problem, but it will generally speed up things no-end. If we still have to sit there all day though and wait, it will be a problem.” 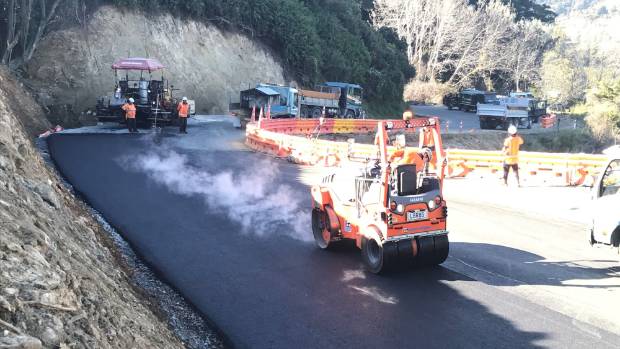 Asphalt is laid on the Takaka Hill road in preparation for the return of truck and trailer units on Tuesday.

Sollys has been been hit with a $600,000 loss following severe damage to the only road out of the area during ex-cyclone Gita on February 20.

The business has seen a 70 per cent increase in costs since the cyclone. 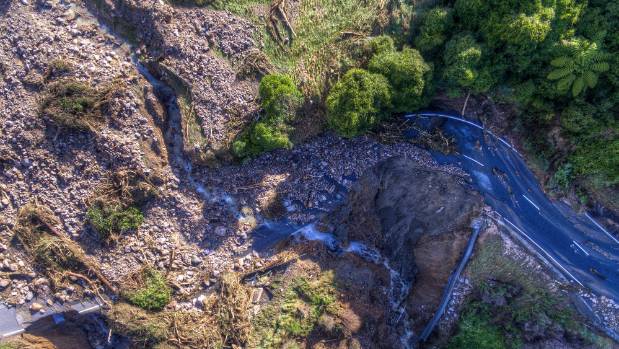 Truck and trailer units will be able to travel over the hill in the 6am–8am and 5pm–7pm convoys, without permit, from midday Tuesday.

The lunchtime freight run is open for permitted truck and trailer units, and buses, also with permits.

Solly said New Zealand Transport Agency (NZTA) did a test-run over the hill with one of his trucks carrying a trailer last week.

“It was a bit too narrow on one corner, so they have to do a bit of work to allow that to happen.”

Extensive slips and wash-outs means Takaka Hill, the only access road to the Bay, has had restricted access for the past four weeks.

Larger vehicles and trucks with trailers have been banned on the road since it was damaged. This has meant Sollys and other companies have to use smaller trucks to make more trips.

NZ Transport Agency Network Manager Frank Porter said crews had been resurfacing damaged sections of the highway, after they were widened to accommodate truck and trailer units.

The widening had provided extra lane width needed to safely navigate some of the tighter corners, damaged due to slips and washouts.

“The crews have worked incredibly hard to reach this milestone,” said Porter.

“We’ve tested the route to make sure that a range of truck configurations can safely navigate their way through. Drivers will still need to take extra care around tight corners.”

Porter said he knew restricting truck and trailer units had had an impact on Golden Bay businesses and the community.

The road will be open for Easter.

Porter said over-dimension and over-weight vehicles would be considered on a case-by-case basis and should contact its Nelson permitting office for further details.

Pedestrians and cyclists are still unable to use the road.

Motorcyclists are also being asked to “not jump the queue”. They should expect patches of loose gravel and wet areas that will need extra attention and care.

The NZTA has seen an average of 1000 vehicles travel the hill each day, with 1900 on Sundays.

“The number is steadily rising, which is great news for Golden Bay,” he said.

“The road is becoming more and more reliable and we are doing everything we can to enable tourists, local people and the freight industry access to this beautiful part of New Zealand.

Takaka Hill will be open 8am – 8pm over Easter holiday period

Back to all news
Up to Date